A few years ago I taught two very short classes at a local high school. This school had set aside some time to bring in community experts for extra-curricular programming, and students were able to select which classes they would attend. My two classes were identical, or should have been. Both were for older high school students, both mixed gender though mostly girls, both had between 20 and 25 participants, both had the same class outline, same activities, same discussion topics. Both were even in the same room. One of the school’s teachers sat in on the classes, sort of as a proctor.  And I came away with a clear illustration of group dynamics and learning about safety.

As I mentioned, both classes were mostly girls with a few boys. But in the first class, the girls were more giggly, reluctant to show competence, especially in physical skills such as striking a mitt, and kept looking around as if to see who was watching. A couple of the boys were more vocal, in a participatory way, then average. It’s not like there was “mansplaining” going on, or those boys interrupting girls, or making disparaging comments. The girls were acting in a very self-conscious manner.

The second class was different. Similar size (a couple fewer kids), similar gender distribution. But different dynamics. In this class there was a lot less giggling. Everyone seemed to participate in class activities, including the basic striking skills, and striving for improvement. No single person, or group, stood out as sharing more than their due. 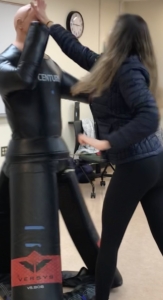 After the two classes I chatted a bit with the room’s teacher. I brought up my observations of the different group dynamics. She thought the difference was in the specific participants — the first class included some of the “popular” boys. Boys who were admired, who she thought of as “good” kids but their opinions were given greater weight by other students. The boys in the second class were also well-liked, but they were not in the “popular” group.

I’ve always had “socialization” as a class topic, and since then I’ve expanded the conversation. (Especially now that classes are online.)  Socialization is what behavior is rewarded, in a social way, or punished. Peer pressure. So you’re in school and say something, and a few others make faces that indicate your comment did not at all resonate with them, and they ignore you and don’t sit with you at lunch . . . peer pressure and socialization.  Can this happen at work also?  Oh yes.

For girls (well, not just girls), I ask them to think about when they wanted to say no, or set a boundary but did not. What were the barriers? How much of that is social pressure? We are social creatures, we look to others for acceptable behavior, for standards, for boundaries.

Never under-estimate the need to fit in. While this is most often connected with teens, it does impact all age groups in varying degrees. Sometimes social pressure and your needs are at odds. And part of your safety planning is in recognizing those situations, navigating those situations, and making honest and accountable (to yourself) choices.