In self-defense we talk a LOT about saying NO and STOP and BACK OFF!!!  But more often in our routine lives saying YES could be the more satisfying option.  What if the request is coming from a stranger?  Here I’m going to describe one instance of my process.

This happened to me only a couple of years ago. I live in a little house in the part of Seattle called Beacon Hill, which is south of downtown and even south of the baseball and football stadiums. A quiet residential area, except for the nearby highway and airports, which can be a bit noisy in a droning sort of way. Not exactly a cul-de-sac, but limited cross-streets and little traffic. That nearby highway is Interstate 5, and I could just cross the street, walk a few feet to the fence, go through the gate, and I’m a hop, skip, and jump from the road.

It was middle of the afternoon, middle of the week, in the summer.  I had arrived home after teaching a morning class, pulled up in front of my little house. Got out of my car, locked the door, and turned to go up my walkway. From the corner of my eye I saw a person. Now my neighborhood sees few pedestrians, especially in the middle of the day, so a pedestrian is noteworthy. Especially one carrying what looked like several gallon plastic jugs.

He called out to me, “Miss, hey Miss!”  I turned. He was on the sidewalk in front of my little house, and I was half-way down my walkway (so there was quite a bit of distance between us). He said his car’s radiator sprung a leak, and he asked if he could get some water.

I could have run into the house and locked the door, but like most humans I prefer to be helpful.  Saying YES would fulfill that, and how could I make sure I stayed safe at the same time?  I noted he did seem to be stressed. Could have been from his car’s breakdown, or considering that if I said no he may have to knock on doors which would be more stressful. Perhaps he didn’t have access to AAA or other roadside assistance. But the most important clue was that he stayed on the sidewalk. He did not try to get closer by coming onto my walkway, and seemed mindful of boundaries. So I said YES.  I would bring out the garden hose and he could fill his jugs. He asked if it were OK to come back a second time, and I said sure, just let me know when he was done. And I got the hose, brought it close to where he was and still kept over 10 feet of distance. I left him to his refilling. Of course I watched periodically as he filled jugs, left, returned, filled them again. When I figured he was done I went to my doorway, we made brief eye contact and he thanked me and left.  He even smiled! He looked less stressed. After he crossed the street and disappeared onto I-5, I retrieved the hose.

If you’ve taken any of my self-defense classes, you may remember that all attackers need both a target and an opportunity. If you short-circuit either, you’ll be safer. Signs of opportunities, also called red flags, I could have been looking for would be distracting chatter, 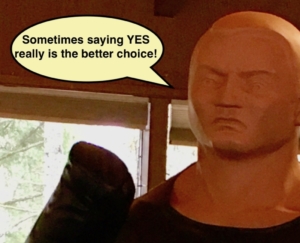 questions of a personal nature, or questions about my neighbors that feel intrusive.  And simultaneously trying to stealthily move closer. Because any attack depends on proximity. That was my key indicator then, and it in this instance it worked out well.

Keep in mind this was MY response at that time. It does NOT make it the best response or the correct response.  I believe the thought process is far more informative than the specific decision.  And while I made a decision, I did keep the young man on my radar and was ready to re-assess that decision should the situation change.  Saying YES is an important choice, one which we should be able to consider.

And that’s all for today. Stay safe, live life.

Living Through Interesting Times
Time for a Bystander Intervention Success Story
What If He Gets Angry?
Getting Caught in the “Conversation Web”
Red Flags and How to Fix Them
More on Body Language, Again, Because It’s Important
Identifying Child Molesters, a book by Carla van Dam, PhD
Eerie in October
Contact