Tara, a young business owner, was excited about buying her first home. And then found out a bit more about the new neighborhood: 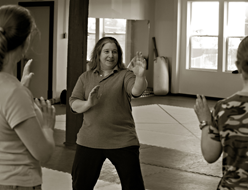 I’m originally from a small town in the Midwest. I’ve been a Seattle resident for many years, but recently I moved to a new neighborhood. My new place was quite different from my old neighborhood – more people closer together, more foot traffic, more drug activity and more vagrancy. Like any urban resident, I’ve been panhandled a lot. But in my new place, I was being approached for money while working in the yard, coming and going from my car, and even sometimes while in my house. I began to feel very overwhelmed and uncertain. Under these circumstances, could I even say no? Would I or my property be harmed if I did? I fell for several embarrassingly common ploys. I learned a lot in my first months at the new house, but I didn’t want to learn everything the hard way, one lesson at a time, from direct experience. Like a lot of women, I had never been in a fight or hit anyone. Now I foresaw a time when I might need to physically defend myself, and I didn’t want my first attempt to be a life or death situation.

Taking Joanne Factor’s self-defense course was a big help for me. Already I’ve used the skills of threat assessment, boundary awareness and assertiveness to feel safer and more confident in my neighborhood. The knowledge I gained of common manipulations and ploys was immediately helpful, and shed light on my recent experiences. Like a lot of women, I’ve been socialized to be nice, to be a helper, and to always give people the benefit of the doubt. These are great qualities, but in the wrong context they can turn dangerous. Joanne’s class helped me recognize how this timidity put me at risk with a potential predator, and how I could project the assertiveness to protect myself in this new environment. The physical skills were easy, fun, and very empowering to learn. My boyfriend is almost a foot taller and forty pounds heavier than me, and he agrees they’re quite effective and intimidating! Learning to use my hands, elbows, feet, voice, eye contact, and every other weapon at my disposal has been a real revelation for me. Of course, I hope I’ll never have to use the physical skills I learned with Joanne, but I can and I will if it becomes necessary. 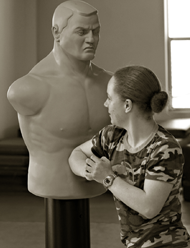 Joanne’s approach is smart, non-judgmental, and welcoming. She’s very well-read and informed on security related issues, and her class includes many helpful handouts, visual aids and reading recommendations. There’s plenty of time for practice and individual questions, so the information becomes ingrained and reflexive. I’ve taken short self-defense seminars in the past, and came away with very little helpful information. Joanne’s course was much more comprehensive, detailed, and retainable. The skills and information available here are well worth the cost.

Six months after taking the program, I feel I am still benefiting from it. I think the six-week course really helped me incorporate the information into my everyday life. I feel better connected to my gut instinct, more self-aware, and more comfortable asserting myself. Ironically, as my tool kit has expanded, I seem to have less need to use it. I’ve learned to project confidence, so I’ve been targeted far less. I have the mental skills to understand a threatening interaction and take control quickly and simply – and if that doesn’t work, I know I have the physical skills to back it up. I highly recommend this course to any woman who wants the same empowering transformation in her life.

Holly’s husband insisted she take this class, and afterwards she sent this email to all her friends:

Hello, friends! This is the first “group” Email I have ever sent out, so I am a little hesitant to mail to this many people at once.

However, I wanted to let my girlfriends (and their husbands) know about an exceptional self-defense class for women. I just completed it myself, and would highly recommend it to anyone of the female persuasion! I didn’t want to do it, but at my husband’s insistence, my sister and I signed up for the class. It is one of the very best things I have ever taken, and I’m so glad we did it!

Husbands, this would be a great gift for your wife or older daughters! I originally had a bit of a bad attitude about taking the class, but Matthew said that “I was his greatest treasure, and since he couldn’t be with me to protect me every minute, he wanted me to have some skills to protect myself.” He told me I ought to include the husbands in my Email, because they all felt the same way as he did about THEIR wives!

Again, I don’t often send large Emails or recommend things to friends, but this was so good I just wanted to pass it along! 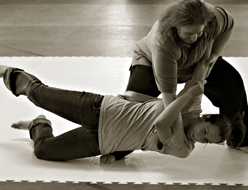 Beth: Telling a stranger to back off.

What happened: Beth was waiting for the bus on a late November afternoon. A stranger approached, asking the time. He moved closer and closer, even after she answered. In the past, Beth would have averted her eyes and tried to make herself into a small ball.

What Beth did: Beth remembered to breathe. And to breathe she had to keep her back straight and her head up. Beth found herself making eye contact with the man, taking a step back, and calmly stating that he had to back off.

Outcome: To Beth’s surprise, the stranger backed off. There was no confrontation. When the bus arrived, he did not get on. It was the kind of non-event everyone hopes to have.

Amy: Listening to her inner voice.

After a decade of unsatisfying jobs, Amy returned to college. She was still working part-time and caring for her two young children, so she found herself at the campus library at odd times, often when few people were around.

What happened: As she walked to her car in the parking lot, she saw a young man heading quickly towards her. He called out, asking for a ride to the other end of the lot so he could catch a bus.

What Amy did: She trusted her intuition, which told her not to let him get close.

He ignored her when she refused, persisting in his approach. She described what happened next: “I heard Joanne’s voice, as if she was at my shoulder, telling me to watch his distance, use any barriers, enforce those boundaries. I have the right to define my boundaries, not him.” Amy got to her car just before he did, and as he reached for her, she opened the driver door and slammed it into him. Amy followed that with a strike to the throat while yelling at him to stop now.

Outcome: The man, stunned, staggered back. Amy drove off, and reported the incident to campus security.

Over two years later, Amy credits this incident as a turning point in her self-confidence. Frankly. she had until then been skeptical about whether she was really learning useful self-defense, and was amazed that she was able to quickly and effectively execute her learned skills. As an unexpected benefit, trusting her instincts has given her an air of self-assurance and poise, which she believes led to a more promising career than she had imagined when she went back to school. 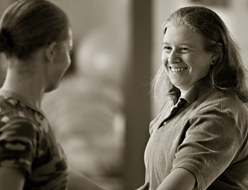 What happened: Judy got along with all of her coworkers at her downtown office, except one. Max often directed sexual comments at her, but what bothered her most was how he’d come up behind her and rub her back. Judy tried to rationalize that it really didn’t mean anything and she didn’t want to make a big deal out of nothing. She also recognized that trying to justify not speaking up and setting boundaries when she was uncomfortable meant she was intimidated and it was affecting her work.

What Judy did: After some coaching on verbal boundary setting, she felt prepared. When Max next tried to rub her back, she told him to stop. “I don’t like that, it’s not professional, do not touch me.” Taken aback, he said he didn’t realize how she felt. “Now you know, and please stop.” She also brought it up to the Human Resources department. The behavior stopped, and Max has been civil.

Outcome: Judy felt like a mountain was taken off her. She was able to say what she needed to say to take care of herself. And she knew that, if necessary, she could–and would–do it again.

Denise: Confronting an intruder in the workplace.

Denise worked in a medical research lab requiring access to germ-free environments. All scientists and technicians were required to enter through locked locker rooms, shower and don special clothing. They were required to shower again before changing back to street clothes.

What happened: Denise was almost ready to go home one Saturday afternoon. As she was just drying her hair, a man entered the women’s locker room. Denise knew most employees but she did not recognize this man.

Denise’s Learned Responses: Making eye contact, she bombarded him with questions: who are you, who do you work for, how did you get the combination, why are you here, who’s your supervisor. Her voice took on the style and tone of command. And she stepped forward, rather than cowering into the corner.

Outcome: The man turned red, began moving to the door, and stuttered that he really didn’t mean anything. He just wanted to see if the women’s locker room looked like the men’s!

Denise remembered her lessons. She refused to be distracted. She kept up her questions until the man turned and ran. 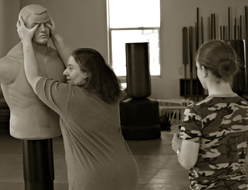 Before the class: Carolyn had years of recurring nightmares. A small weasel-like animal would jump on her and start biting her all over. She wouldn’t be able to get it off. None of the people around seemed to notice, let alone help.

After the fourth week of class, Carolyn’s dreams changed. She broke the animal’s neck.

History: Edna had been raped several times in her life, beginning in her childhood. She took refuge in drinking. Finally, she entered rehab and was ready to start an independent, healthy life — except for one problem.

She was terrified of living alone. She had recurring nightmares about assault, jumped at any unexpected sound, and felt all eyes were sizing her up as she boarded a bus. She took a dozen pills a day for anxiety, insomnia and depression.

Outcomes: Twelve weeks later, Edna reported she had stopped taking medications (with the approval of her therapist), was sleeping well without nightmares. She was taking her first steps toward (finally!) living an independent, healthy life.

The best predictors of a woman successfully fighting back against an assailant are first recognizing when an assault is in the making, and second trying one thing after another until she finds what works.