Over the last month I’ve written about seeking support (several posts, in fact:  Part 1, Part 2, Part 3).  Finding family, friends, even professionals, who would be supportive should you need help.  Finding safer spaces.  While that help can be material, mostly in our self-defense classes we talk about emotional support.  This post follows Part 3, where at the end I talk about not just finding support but your role in creating a supportive community.

Here is a book that addresses those same concerns:  Making Spaces Safer, by Shawna Potter.  The subtitle says it all.  “A guide to giving harassment the boot wherever you work, play, and gather.”  Because whether you are out to make a living, have fun, or change the world, contending with the extra obstacles of harassment is an unwanted detraction.   It diverts your energy from what you want. 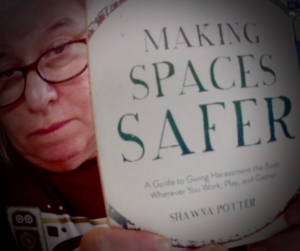 The ideas Potter puts forward are based in her work with Hollaback! in Baltimore, as well as with her workshops as she toured with her band.  They are simple in concept, but as with most simple ideas they can be hard to implement.  There are folks for whom the status quo is just fine and see no need to change, or who are advantaged by ignoring harassment, or who just hate change and what it may represent.

Let’s get back, though, to the simple.  Really, it’s like all the stuff you should have learned in kindergarten.  About asking first and sharing and saying please and thank you.  Let’s get to some specifics.

About now you may be shaking your head and thinking about how this is all well and good, but just not practical.  Well, it is.

Homeroom is a restaurant in Oakland, California.  They serve mac & cheese.  Some sides, but their raison d’etre is mac & cheese.  Comfort food.  Erin Wade, chef and owner, wants everyone to feel comfortable.  So she was appalled when she found out that some customers had been harassing the servers, and that managers were doing little about it.  They had a meeting, and she heard a lot more that had not been reported.  Not OK with Wade (did I mention that before starting this restaurant she was a lawyer?).  They instituted new procedures, and shifted control.  Really simple, too, based on color coding.  Incidents were graded yellow, orange, or red.  A yellow meant that a server reported an uncomfortable vibe or look to a manager, and the manager would take over that table if the server chooses.  An orange is inappropriate comments, and the manager does take over that table.  A red is overt sexual comments or physical touching, and the customer is ejected from the restaurant.  Please read these two articles for more details:

Note the critical change is that it is the servers who decide what level each incident warrants, and the manager has their roles already prescribed.  No need to wonder if the customer really intended that, or if the staff was just too sensitive that day.  The power is in the hands of the (mostly female) server staff, rather than the (mostly male) manager.  (BTW, Wade also then recognized the gendered job levels and was seeking to change that also.)   And this system works because it has become the company culture.  Because Wade sought to shift the balance of power, support that shift, and deliberately make her restaurant a safer space.