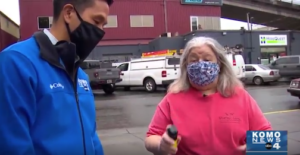 Joanne Factor on KOMO TV on February 9, 2021 talking about how to use pepper spray.  Visit this link to read the article and watch the video (second video in article, first video is also good). 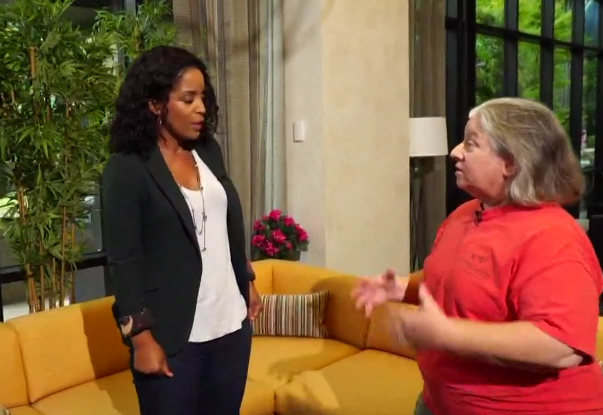 Girl Scouts extraordinaire Julia Witecki and Carleigh Templin organized a Bleedership Conference, held on Saturday May 28, 2016 in Tacoma. Their aim was to raise awareness of the impact of the lack of sustainable hygiene products in the developing world, as well as eliminate the negative stigma around menstruation in our society. I was happy to contribute a self-defense workshop. Read more here:http://www.thenewstribune.com/news/local/article80587902.html#storylink=cpy

Joanne Factor on Q13 Fox News on Tuesday, May 10, 2016. Topic: Uber driver’s inappropriate behavior towards passenger, and your safety.

Check out Joanne’s appearance on New Day Northwest, hosted by Margaret Larson (and thanks to Tyler the intern for helping to show the techniques)! April 7, 2016.

(You can also read the article on KOMO-TV’s website.)

Q13’s Parella Lewis conducted this interview for Washington’s Most Wanted, and it aired the first week of October 2013. IMPORTANT NOTE: If you are in an abusive relationship, please call a DV hotline and discuss safety planning BEFORE you need to use these skills! Sometimes using physical self-defense skills can have unwanted consequences.

The Seattle Times’ Pacific Northwest Magazine section of June 30, 2013 ran two articles and one video: Fitness columnist Nicole Tsong participated in a Strategic Living class and wrote about her experience. Reporter Susan Kelleher interviewed Joanne Factor (as well as other local self-defense and martial arts teachers) for this article on best practices for women’s self-defense. Photos taken by Erika Schultz illustrate both articles, and are online in this photo gallery. Erika also filmed and edited this video interview of Joanne Factor and a self-defense class:

Should You Defend or Avoid? Ask the Self-Defense Expert, on KUOW’s The Conversation( 94.9 FM), hosted by Ross Reynolds, Thursday March 7, 2013. Talking about self-defense situations and tactics. Listen to this show. And check out the accompanying KUOW web page.

Chat With Women (KIXI 880 AM), hosted by Pam and Rochelle, invited me to chat about self-defense for women on February 28, 2013. Listen to the chat, and visit their page to find out more about their show.

KIRO TV’s Deborah Horne interviews Joanne Factor of Strategic Living Safety and Self-Defense Training, February 12, 2013. Motivated by the recent assaults on women in North Seattle areas, this appeared at 5:30. (If you cannot see this video, try the KIRO TV site.) Later that evening, KIRO TV’s Alison Grande comes by a self-defense class and they shoot video, some of which is used in the next segment that aired at 11:00 pm.

Listen to this interview of Joanne Factor by Carol Carini of the radio program Live Life and Look Good Doing It, August 17, 2012 (KKNW 1150 AM).

The Seattle University Spectator (Feb 23, 2011) interviewed Joanne Factor for this article on safety around campus (and the rest of Capitol Hill). Main take-away: fighting back works.

KIRO 7’s Gary Horcher interviews Joanne Factor of Strategic Living Safety and Self-Defense Training, January 31, 2011. This too was motivated by the recent assaults on women runners. (If you cannot see this video below, you can watch it on YouTube.)

Interview Dec 22, 2010 on KOMO Radio, brought about by the rash of assaults on women running or walking around some of Seattle’s popular parks.Includes some tips on keeping yourself safe.

Blogger Mary Davies wrote Women Being Brave about her experience in Self-Defense Basics for Women, March 3, 2010.

The Olympian July 23, 2007: Click here to read about a self-defense workshop I taught for the Olympia YWCA’s Girls Without Limits program.

The Olympian August 31, 2006: A self-defense seminar at the Lacey Timberland Library to commemorate the 19th Amendment (giving woment the right to vote). Organized by NOW. Read here.

The University of Washington Daily February 12, 2004: The Safety Factor, interview with Joanne Factor on self-defense hows and whys. Read here.

I don’t want to be a passenger in my own life.