These last 2 weeks I’ve been outlining finding support after assault.  Self-care is a critical aspect of anyone’s overall safety plan, and the central pillar of self-care is knowing who among your family and friends could support you after any assault, regardless of outcome.  Two weeks ago I began outlining traits of those individuals, with my thumbnail sketch of what a supportive human does.

Two weeks ago I described what listening looks and sounds like.  Last week I described what believing you and reminding you it wasn’t your fault looks and and sound like.  Today I have a few more words on blame and fault-finding, and then move on to creating community.

First, some words about those who habitually blame victims for their own assaults. This is chronic in domestic violence, where the abuser is manipulating the target’s perception.  Very often also manipulating the perception of those around, cutting off ways of getting support.  This is often described as “gaslighting.”  It is a long-term strategy for you to relinquish control and hand over decision-making. 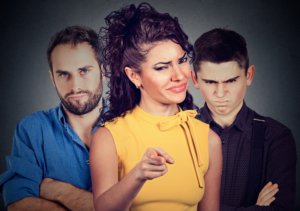 Getting support? Not from them!

A major process in our culture is an adversarial approach — our justice system and political system are set up to pit two sides against each other, there are defined rules and referees, they duke it out like a boxing or martial arts sparring match, and a winner is picked. So it’s not really a surprise that some of us expand that view, that life is a brutal competition.  It bleeds into other parts of our lives, where there are no explicit rules, no referee, and it’s not a good fit.  And it’s all about power.

There does not need to be a long-term relationship for blame-shifting to occur.  People who harm others often try to shift attention away from themselves and their actions to what the victim did “wrong.”  The stereotypical ones include “what was she wearing,” “how much did she drink,” and “she was flirting.”  Others in our communities, like ourselves, want to stay safe and part of their process, though, is to find out details about what happened to others and resolve to not make the same “mistakes.” Except there’s a big problem with this approach.  The person targeted may have done something different, and it may have made a difference, or maybe not.  There are people who do “wrong” stuff all the time — they smile at strangers, they drink a lot, maybe even pass out on a friend’s couch.  And didn’t get assaulted.  Because there was no assailant present.  The common elements of all assault isn’t clothing choices or alcohol consumption or flirting, it’s the person(s) who made the bad choice to take what they wanted, regardless of consent.

Do you want to wait until after an assault to figure out who your supportive friends are?  Probably not.  Rather, you can be cultivating those relationships now.

My colleague Yehudit Sidikman of ESD Global suggested in a recent blog post that you practice talking about “what-if” scenarios with those important people in your life.  One of her examples is, “mom, if something like this [kind of assault] ever happened to me, how would you react if I told you?”  Or begin a conversation with a good friend like, “ I’ve never had this happen to me, but I am wondering how you would react if I came to you and told you that [add story].”  Maybe there was a recent assault in the news, you could use that as your example.  Or a particular #MeToo story.  Their responses can give you some information about what they think about assault and blame.  We do all know that there’s often a gap between what a person says and what they will do, so please temper this with what you already know about them.   But, perhaps more importantly, it will also give them food for thought. And this does not have to be a “one-off” discussion, and should not be a one-off.  You transition that “what-if” into a conversation on what it means to be supportive, to be a friend, do you want to be supportive, when do you feel it important to be supportive.  When these conversations happen with a few people in your circle, and it becomes less awkward, you get a better sense of where people are at.  You find those who share your values, and you maybe even move others to really think about what support means.

Building these relationships takes a while.  And it is critical.  And that’s how communities begin, one relationship at a time.

Why don’t you begin with the very next conversation you have with someone close?  Today is not too soon.

Today, November 11, is Veterans Day.  The one day where we as a nation formally thank those who served our country with their military service. Parades, taking out old photos and uniforms, visits to memorials.  We recognize all those who served.  At the same time, as a nation we are less caring about veterans’ getting support they need.

For about 12 years (between 2003 and 2014) I worked with Dr. Wendy David, Dr. Ann Cotton, and the VA Medical Center in Seattle on the Taking Charge project.  This 12-week self-defense program was for women veterans who were suffering from long-term, chronic PTSD as a result of sexual assault while in military service.  (Unfortunately, the program ended when Dr. David retired.)  If you are familiar with PTSD, you know it’s not pretty.  Watch this short video for more on the effects and possible causes.

While this blog post not an exposition on PTSD, I have to note there’s a significant correlation between social support and the likelihood of an assault survivor developing PTSD.  One commonality all the participants in Taking Charge had was a lack of support from those around them after their assaults.  Our culture does come with a large victim-blaming component, and sorting out those who can be supportive from those who won’t is likely to be critical to your long-term health and happiness.

Last week I began outlining how to find those individuals who would be supportive, with my thumbnail sketch of what a supportive human would do.

Last week’s post was on the first bullet point, listening.  Today I’m moving on to the other two.

They believe you.  Most women are assaulted by someone known to them, particularly in cases of sexual assault.  They may be a friend, a co-worker, a classmate, a colleague, a family member.  Because of that, others you know will also know that assailant.  When you confide in someone in that same circle, it can get complicated.  That person may be struggling to wrap their brains around what you are telling them, which may be totally counter to their own experiences with the assailant.  They’re trying to figure out how someone they know as a kind and generous soul could have done something so wrong.  We humans do not do well with that sort of cognitive dissonance.  That can come out as questioning your account of what happened, which comes across as non-supportive.  One option is to confide in someone from another social circle.  Another is to cultivate relationships of support, which is the topic of next week’s blog post.

Finally, a supportive person will remind you that the assault was not your fault.  Period.  End of sentence.  It is so common for the person assaulted (or targeted) to go over details again and again and again in their heads, trying to figure out if they could have, should have, done something different.  Maybe there is something they could have done differently.  It may or may not have made a difference.  It’s overlooking the fact that someone else made that choice to harm someone.  That’s right, the assailant is not like a fast-moving river into which you slip and fall.  Rivers don’t make choices to injure or drown people.  But people do.  The assailant is the person who is responsible for their actions.  If you are the listener, please make it a point to remind your friend/family member of that.

And, in a nutshell, that’s how you know someone is supportive.  But, do you really want to wait until you are in need to find those trusted, supportive folks?  No.  Next week we’ll look at building supportive communities. 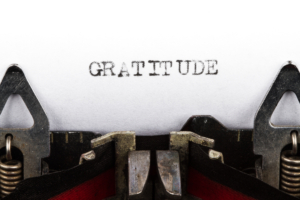 I’m writing this on November 5, just after Election Day, and we don’t know who will be trying to steer our country over the next four years. More than 230,000 of our fellow Americans have succumbed to COVID-19.  Many Americans don’t know if they’ll have food and shelter in the near future, while others are experiencing more closeness and good times within their families.  And, within the next few weeks, we’ll each have to figure out how to deal with conflicting pressures around the holiday most associated with family and home and gatherings.

Cathy, a friend and colleague, has an annual tradition for this time of year. It’s the Gratitude Project. It is a private Facebook group. Each and every day of the month, Cathy posts something for which she is grateful. Others joined in, and now there’s over 550 members.

The idea of turning to gratitude in uncertain or troubling times is not new, and you don’t have to search long before you find online resources (such as this article). I personally find a focus on gratitude helpful.  Some nights, when I can’t fall asleep, I challenge myself to find three people (or groups or events) for which I am grateful.  I’m usually asleep by the time I’m going over the wonderful attributes of the second. For me there really is something calming and reassuring in recalling that for which I have to be grateful.  I’ve written other posts on self-care; recalling to whom you are grateful is both soothing (emotional management in the moment) and true self-care (laying the groundwork for a future healthier and more resilient self).  When would be a good time for you to routinely think about gratitude?

Life may be a bit rocky for a while longer. Keep up that self-care, and look out for others who may need some extra support.

Scroll to top Do NOT follow this link or you will be banned from the site!