Today is Wednesday, Sept 22, 2021.  The first day of Autumn!  It’s like a week or so ago someone flipped a switch, and virtually overnight we went from Summer to Fall.  That’s just the way seasons change in the Emerald City.

In last week’s class a participant shared a bystander intervention success story.  She has this neighbor who, when he sees young kids or smallish older women walking by on the street, aggressively approaches them.  He would yell profanities, gesticulate menacingly, and try to get uncomfortably close.  Those targeted, their reactions were — not surprisingly — fearful; they’d try to make themselves smaller, sometimes even apologize, and try to back away as quickly as possible. 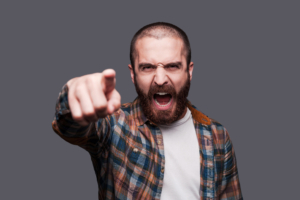 This student had had enough of the spectacle.  One recent day the neighbor had begun his rant on yet another older woman walking her small dog.  My student strode near to him (keeping distance of course) and told him to leave, to stop harassing people.  Yes she did raise her voice.  The neighbor was taken aback, and he left.  And, ever since then, whenever he sees my student, he retreats back to the safety of his own abode.

We had been doing more work with bystander intervention since the beginning of the pandemic in our virtual classes.  It is a valuable skill so I’ll be bringing it more into my longer classes (those would be the 5 hour Self-Defense Seminar and the 6 week Self-Defense 101).

A lot of us envision bystander intervention as something scary we would do with angry strangers on the street, or bus, or grocery store.  And those instances are important.  Most opportunities, however, will arise in more familiar settings, and involve people we know.  People with whom we’ve some history, and can often guess their reactions.  And it’s great to learn and practice some skills to make your day-to-day living smoother and more peaceful.  I’ve got a full range of classes coming up this fall, and I’m slowly getting my winter offering up online.

Good morning, today is Wednesday Sept 15, 2021.  It’s another pleasant late summer morning in the glorious Emerald City.  Tonight begins Yom Kippur, or Day of Atonement, the most significant of all Jewish holidays.  A time for reflections, on forgiveness, on atonement, on resolving to do better this coming year, to be a better person this coming year.

One approach to becoming a better person could be how we handle the “oopsies and ouchies” that sometimes pop up in interactions.  For instance, one person uses a phrase that perhaps they’ve heard all their lives and never really thought about what it meant, and it contains words that negatively reference the identity of someone else — a friend, a co-worker, family member — who is standing right there.  In an ideal world, that would not have happened, but we don’t live in that ideal world.  In my next-best world, the listener would be comfortable pointing out the phrase as derogatory, and the person who uttered it would be amenable to upgrading their language, in part because both listener’s and speaker’s intent would be to maintain a good relationship.  Because, in my next-best world, acknowledging oopsies and ouchies is what people would do, with the hope of creating a healthier community together.

I used to hear the phrase “that’s so gay!” to refer to something considered stupid.  Rarely do I hear that these days.  A lot of people are good with asking others to upgrade their language in certain situations.

This notion is fundamental to understanding communication.  True communication is not just what is said, it is also what is heard.  Yes intent is important, and so is the impact on the listener.

For this to work, participants actually have to agree that they want to get along and make an effort.  That the impact of one’s actions, even well-intentioned actions, can adversely affect someone else.  Are you willing to consider that?

We look at these issues and skills in some of our classes, esp the six-week Self-Defense 101 course.

Good morning.  It’s another fine day in the glorious Emerald City, though I can definitely feel the chilled fingers of autumn reaching out.  Today is the first day of school for Seattle Public School students.  Full days in person, mostly.  I think there’s still some remote learning.  It’s going to be an interesting year.

But, moving on.  Maybe 20ish years ago, my mother got her first email account.  She and her friends all “hung out,” if you can call it that, in the same chat rooms.  I have no idea what else they chatted about, but one of the BIGGIES was exchanging jokes.  These were not good jokes.  They were kind of off color, questionable taste, and — most importantly — really not funny.

I have to state that in my whole life I don’t think I heard my mother ever tell a single joke.  Yet here she was, finding all these bad jokes and sharing them.  Not re-telling them, but using that other email feature, the FORWARD.  Yes, for a brief time she forwarded ALL the jokes.  To me.  Between 15 and 25 per day.

This was clearly a time to set boundaries.  But setting boundaries with a parent can be touchy.

So we had our own chat.  Over the phone.  I told her the jokes were bad, as in not funny.  And there were way too many.  And they really were really bad.  So I put her on a joke diet.  She had choices.  She could email me up to three jokes a day.  Pick out the “better” ones and forward those.  She agreed.

First, she stopped forwarding jokes.  Turns out she never thought they were all that funny either, and just the ease of hitting “forward” was driving it.  She thought we all were supposed to “share” stuff (she didn’t read that part of the memo where you’re supposed to “share” good stuff).  As a result of the joke diet, when she had to actually go through and select, it was just no longer worth the effort.

Second, it got a little easier for me to set other boundaries, in terms of my state of mind.  Just the thought of having to set a boundary can be stressful, accompanied by a whole range of emotions and what-if scenarios.  What if she got angry, what if she was upset, what if our relationship was damaged, et cetera.  I’d been feeling resentful that I even had to set that boundary.  After setting that joke boundary, I felt less resentful about articulating my limits.  And when I felt less resentful I was more OK with acknowledging that my mother and I were not going to agree on a lot of stuff, and that was fine, and I could move on without carrying so much extra baggage.  And getting into fewer arguments left me in better moods.

I can’t say I planned all that, but I noticed that setting some small boundaries where the other person can agree may just have given me the boost to feel better about other boundaries.  Build on your successes.

And while you’re thinking about your next tricky boundary-setting, we cover this in our six-week self-defense courses.  Next one begins Sept 11.