About a month ago I posted about a book I just read, Identifying Child Molesters, by Carla van Dam, PhD (2001). Today I’m reporting on another of her books, The Socially Skilled Child Molester: Differentiating the Guilty from the Falsely Accused (2006). While there’s a lot of overlap in content between the two, the difference of five years does give each its own flavor. 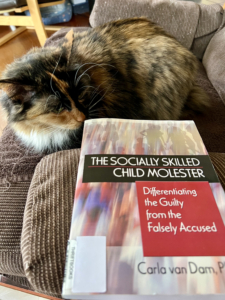 A bit more historical context for Dr. van Dam’s work. In the 1990s, “stranger danger” was the big thing. However, most children who are harmed, both then and now, are targeted by someone they know. Dr. van Dam’s 2001 book detailed strategies used by these abusers.

In this second book, Dr. van Dam draws us composite of a few types of child molesters, based on thousands of interviews. Each composite profile is characterized by their particular approach to grooming the communities, parents, and children upon whom they prey.

In The Socially Skilled Child Molester, Dr. van Dam frames this abuse as a form of addiction. There are implications to thinking sexual abuse as paralleling substance abuse. The abusers have organized their whole lives around grooming families, setting up situations, and gaining access to children. Every relationship, career choice, or location move is based on access to molesting children. And, unless they get treatment, they will continue that behavior.

Can they successfully be treated? Two of these composite characters went through “treatment,” and learned how to better mask their tracks in the future.

Dr. van Dam refers many times to how others often enable abusers, citing the then-recent example of the Catholic Church moving abusive priests from parish to parish, without ever giving parishioners any warning. Maybe you remember that 20 years ago, in 2002, The Boston Globe published a series of articles exposing how bishops would move abusive priests, come to private deals with families that included clauses that barred victims and families from every discussing it, and the immense number of sealed court documents. In a nutshell, the idea was that each incident would be considered just a one-off, that any errant priest was a lone offender, and the real magnitude of the issue got buried. Until reporters at The Boston Globe ran their exposé.

The subtitle of this book is Differentiating the Guilty from the Falsely Accused. Dr. van Dam does bring that topic up a few times. Her thinking is that the guilty are the addicts who organize their lives around finding, grooming, and molesting targets. The innocent, on the other hand, do not. I’m not sure, though, that she focuses enough on that topic to make it a whole subtitle. Perhaps it’s what we’d now call a click-bait title. Because overall we are so afraid of embarrassing or ruining the reputation of a charming professional person who happens to offer very convenient services that we feel initially better off overlooking their “idiosyncrasies.” Unless it hits your family.  As Dr. van Dam states in the Introduction, “[t]he consistency of the practices and strategies of the well-socialized Groomers being examined in this book are successful because of continued public ignorance.”   To borrow a phrase from another famous public figure, as long as we willfully ignore another inconvenient truth, we will continue to allow these molesters to hide in plain sight.

Recognizing the ploys and manipulations of child molesters, as well as adult molesters, is an essential part of our curricula.  Visit our website to find a class that fits your needs.