An often-asked question, or sometimes it’s not even phrased as a question, is about awareness while walking.  Students sometimes say, “I don’t feel I’m as aware as I think I could be, or should be,” and leave that dangling; is it a question, like asking for how to become more aware, or simply a statement of something they’d like to change?  Sometimes its parents complaining that their teens are too focused on their phones and not as cognizant of their surroundings as they could be.  Whichever, awareness is helpful.  Here’s one success story.

One of my students, probably about 7 or 8 years ago, was a high school junior.  She was in the six-week Self-Defense 101 class, along with several of her friends.  They were all attentive, and took their personal safety seriously as they were becoming more and more independent.  One late spring day she and another friend (who was not in this class) were walking down California Avenue in West Seattle, near the Junction.  For those not familiar with the area, it’s a commercial street with lots of restaurants, boutiques, and a wide variety of small businesses.  Generally a robust and busy street.  As they walked and chatted, a young male across the street got her attention.  She noticed that he seemed to be keeping pace with her, and each time she glanced over it appeared his head had just quickly swiveled forward.  Red flags, by her accounting.  Because if you’re walking in public and notice that the same person is in about the same location relative to you several times, they’re very likely following you.

She decided to keep up her awareness while walking, as she and her friend chatted.  But when they got to the next 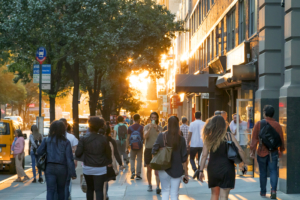 intersection, he crossed the street; some streets are “all ways walk” when the pedestrian light goes green, so you can cross at a diagonal, which he did.  Now he was in front of them.

As they walked, my student noticed this young man began slowing down.  She and her friend were getting closer and closer.  When they were just maybe two yards behind, he just stopped.  Simple stopped walking.  My student and her friend did notice, and moved laterally to walk around him.  As they passed, the young man also moved laterally, literally bumping into them. He seemed to stumble.

My student’s friend, who was the one who actually got bumped, turned to the man and said, “Oh, I’m sorry, are you OK?”  Apparently she wasn’t sure who did the bumping, even though this guy had to move sideways to bump into them.  The guy replied, speaking VERY slowly, “yeah, . . . I think  . . .  I’m . . .”  That’s as far as he got.  My student linked arms with her friend, made eye-to-face contact, and told the man, “we really need to be going,” and just walked off with her friend.  As they left she began telling her friend about her observations.

Note this student could have dismissed any of these behaviors as insignificant, or decided she was over-reacting or even label herself as paranoid.  But instead she recognized the overall pattern, and trusted her gut feelings that her “awareness while walking” sense of red flags was real.  And that is success.

Two Boundary-Setting Tools You Need Today
Self-Care, Part 2 (after COVID-19 was a real thing, and after sheltering at home for a month)
Grateful
Making Better Choices
Saying YES, When You Want To
Group Dynamics and Your Safety Considerations
Do You Trust Yourself?
Your VOICE (Part 1)
Contact