The final day in March, 2021, is another nice, sunny day in the glorious Emerald City. I love sunshine. Rain and darkness certainly have their essential restorative qualities, and inspire me to appreciate the contrasting clarity and brightness of daylight even more. And, on a more metaphorical level, yes of course it connects with self-defense, this IS a self-defense page, of course I’m going to talk about self-defense. To daylight something is to bring it to awareness, to attention. Usually that something is that which many people would rather ignore, like the elephant in the room.

This is coming up, again, in the wake of a slew of assaults committed against persons of Asian descent living in America. Yes, this America, land of the free and home of the brave. I’ve been reading that many of those targeted are reluctant to come forward, to report the assaults. To possibly bring further unwanted attention to themselves. There’s a hope that if nobody talks about the elephant, the elephant will go back to sleep in its corner (until the next time).

Of all the people in the metaphorical room, some may ignore the elephant because they’re unaware of the presence of the elephant because they personally are not impacted. Others because not only are they personally not affected, they are also choosing not to pay attention because it’s not important to them. And some because not only are they not personally impacted, they don’t think it’s a serious or even a real impact for anyone.

If a person not personally affected by the elephant can successfully ignore that elephant, they have some power (the word privilege can also used here) whether they want to acknowledge it or not. If they can define another person’s concerns as insignificant, well that’s more power. If a person can successfully silence those voicing concerns about that elephant, they have real power and privilege. 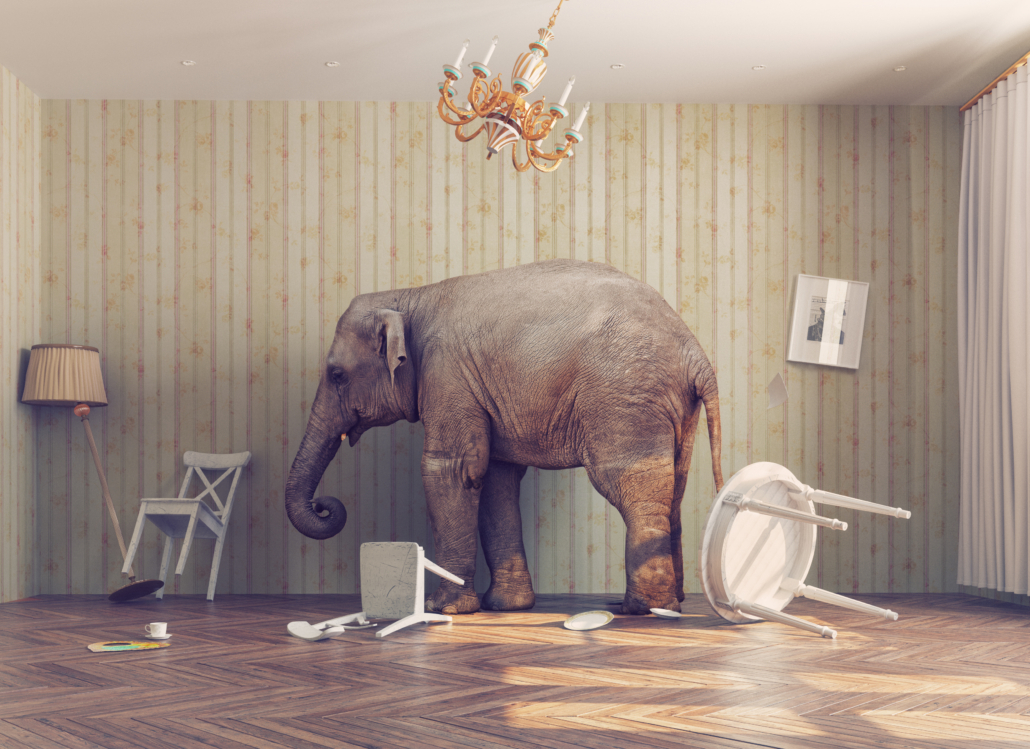 To ignore the elephant when you are profoundly impacted, isn’t that fear of someone else’s power. Fear of retaliation, of consequences for inconveniencing someone more privileged who doesn’t want to deal with your elephant.  There are many situations where using one’s voice at that instant is the best tool, but others where timing is also important.

Seattle-based author and activist Ijeoma Oluo wrote this article about living in fear and living anyways, about silence not helping her. Even though the article is almost two years old, it reads as relevant today as it did then. She also talks about the love and support she’s received from her communities to get her through the hate and death threats.

A significant reason many others don’t speak up is they feel they do NOT have that kind of support. And the burden to speak up should not fall solely with the victim, especially as we know they could be opening themselves to further threats and danger. Because they are not the problem. The problem lies with those committing violence and as well as with people who enable them directly, and indirectly encourage conditions that promote violence.

And violence thrives in silence.

Those of us who see the elephant but are not directly impacted also need to speak up for what is right and provide support.

Not sure where to begin?  Try one of these Bystander/Upstander Intervention Trainings.

Your VOICE (Part 1)
It’s Not Just WHAT You Say — HOW Do You Say It?
“Special Sauce” Intervention That Worked
Time for a Bystander Intervention Success Story
When Boundaries You Set Verbally are Ignored
Saying YES, When You Want To
The Fine Art of Just Saying No
Oopsies and Ouchies
Contact