Seattle’s Northwest Network is now offering a series of free webinars on various topics related to domestic violence and beyond.  I participated in the first one, which was a powerful combination of basic DV education and empowerment model advocacy.

What is “beyond DV?”  Why, healthy relationships, of course!  It’s not sufficient to not be in an abusive relationship, right?  I can’t speak for you, but I want my relationships to be fun and fulfilling.  How about you?

NW Network also has a library of on-demand webinars that are directly relevant to any self-defense instructor  — among the topics are strangulation injuries, and intimate partner stalkers, and battered women charged with crimes.  Not exactly light viewing, but highly educational.

From their website:  Founded in 1987 by lesbian survivors of battering, the NW Network works to end abuse in our diverse lesbian, gay, bisexual and trans communities. As an organization founded by and for LGBT survivors, we’re deeply committed to fostering the empowerment of all survivors of abuse.  The NW Network increases our communities’ ability to support the self-determination and safety of bisexual, transgendered, lesbian and gay survivors of abuse through education, organizing and advocacy. We work within a broad liberation movement dedicated to social and economic justice, equality and respect for all people and the creation of loving, inclusive and accountable communities.

Here are a smattering of #selfdefensesuccess stories that have across my screen these last couple of weeks.

Important to remember: I’ll bet none of these women ever took a “self-defense” class (though at least one had military training).  The two most critical factors in successful self-defense are (1) the belief that it can be done, and (2) trying one tool after another until something works.

From Louisiana, a 72 year old woman routes armed attacker with nothing but her steely instincts and a fire extinguisher. Woman’s son later describes his mom as “a pretty strong old fart.” Yeah, that’s how I’d have described my mom too.  http://www.dailycomet.com/article/20131231/ARTICLES/131239885/1320?p=1&tc=pg#gsc.tab=0

Some self-defense stories are more graphic than are others.  This one is graphic.  Let’s jump across the globe, to Bangladesh.  In this instance, a woman fights back against an acquaintance by cutting off his penis and bringing it to the police.  http://www.opposingviews.com/i/society/woman-cuts-penis-man-attempting-rape-her  The wanna-be rapist then claimed that he was the real victim, because they had been having an affair, he refused to leave his wife and children and move with her to another city.  So, he claims, she cut off his penis and is pressing rape charges to retaliate.  This attempt to deflect responsibility is a common tactic among rapists.

And now back to the glorious Puget Sound, the last one for today is from former student “E” who relates a self-defense success years earlier:

“When I was a young college student, I often passed through New York City to get from my parents’ home to my college in upstate New York. On one such visit, I was walking down a street and felt like I was being followed. I made the decision to act irrationally: singing to myself, walking with a twitch/jerking motions. I tried to act like a mentally unstable person. After a while, the man stopped following me, and I’m certain that if I hadn’t, I would have been attacked.”

Do you want to learn some of these skills that proved successful for others?  A plethora of six week Self-Defense 101 for Women courses are about to begin in the next week.  Visit the page and register today.

Teach anyone any skill set, and she can use it for her own benefit.  However, she is also likely to use her skills to benefit her family and community.

Teach a woman self-defense skills, and she can not only defend herself (and those she cares about) she will probably teach others around her those skills.  Before you know it, she will be demanding self-determination.  She will demand to be an active participant in her life and in society. 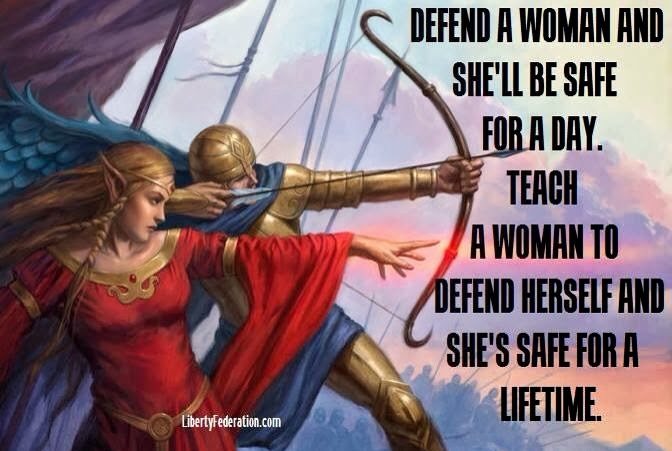 So not only will she be safer, her community will be safer.

Friend and fellow martial artist Jan Parker has been teaching a long time; she was already a master teacher when I was a mere novice two decades ago. She’s seen and heard more than a few wacky reactions when strangers and acquaintances find out what she does. And she just blogged about one such instance at a friend’s party years ago.  The perennial question that most martial artists invariably encounter.  Here’s an excerpt:

. . . [A] young man heard from someone else that I was a martial artist. Boldly, he came up to me to make sure what he heard was true. “So, you’re a martial artist?” I nodded, noticing the drink in his hand. He continued, “Soooooo . . . What would you do if I just hauled off and hit you in the face?”

Before you read on, what do you think her reply was?

Might she have said, “Yeah sure, I’d like to see you try”?  Or how about “I’d hit you back harder”?  Would she call him an ignorant jerk of an a$$hole? Perhaps she would have jumped straight up in the air and, Bruce Lee-style, executed a perfect flying side kick right into his nose!

“I would charge you with assault. What do you think I would do?” “For crying out loud,” I said, “we’re at a party, why in the world would you hit me in the face?”

Surprised, at my answer, he walked away.

She called that a success story. And so do I.  She assessed his intent, decided this silliness was not a situation to escalate, and gave a response he was so totally not expecting.  Perfectly disarming self-defense.

Of course you can read Jan’s re-telling on her blog JanJimJam.org.  Jan Parker, you rock!

Once again, ripped from the headlines (actually, more often inside pages) from the web.  These are all stories of women and girls successfully using safety skills.

This first one is from West Seattle, where a high school girl fights back against a dude who grabs her.  She breaks free, runs to safety, and calls 911.  Way to go!  From King 5 News: http://www.king5.com/news/cities/seattle/Teenage-girl-grabbed-by-man-near-West-Seattle-High-School-235301801.html

How about this one, from our neighbor to the south (that’s Portland, OR).  A guy demands a Portland State University student’s backpack and punches her.  She turns and punches him back, and he goes running!  From KXL FM News Radio:  http://kxl.com/2013/12/12/female-student-hit-in-the-face-fights-off-attacker/

Now from South Carolina, where this guy picked the wrong target.  What he did not know was she’s trained in martial arts.  Whoopsie!  She fights back, and again he goes running (do you see the pattern here?).  http://www.opposingviews.com/i/society/animal-rights/man-attacks-woman-walking-small-dog-myrtle-beach-she-has-black-belt-fight  (Pssssst — you don’t need a black belt to fight back like she did — you can learn the same techniques in Week 3 of Strategic Living’s 6 week self-defense course.)

Let’s jump across the Atlantic for this story out of the United Kingdom.  Woman kicks guy in crotch, and he runs away.  http://www.newmarketjournal.co.uk/news/latest-news/woman-38-fights-off-mobile-phone-thief-1-5757252.  Almost surprised he was able to still run.

And, finally, we return to the greater Seattle area.  Woman fights off attacker on a popular trail in the middle of the afternoon.  She was attacked from behind, and she escaped by fighting back.  http://q13fox.com/2013/12/19/woman-reports-assault-on-north-creek-regional-trail-in-bothell/#axzz2o2Fx8aC6.

Did you see a story in the news, or want to share one of your own?  Contact me!

Prof. Amy Cuddy, of the Harvard Business School, gave a talk at the University of Washington last night.  Alas, I was not able to attend.  Those of you who have taken my Self-Defense 101 classes know how her work on body language, perception, and self-perception can contribute greatly to your personal safety.

That’s because every attacker needs a target and an opportunity.  Dr. Cuddy’s work on body language is relevant to your personal safety because you can learn how to make yourself less likely to be targeted.

Even if you, like myself, did not attend Dr. Cuddy’s lecture, you can still benefit from her knowledge.  She has readily-accessible media, including:

There’s a few more short ones online, so take a look around and be prepared to be informed and fascinated!

I confess, I’ve neglected this blog for over 6 months.  With any luck at all, I’ll resume posting.

Part of the delay is more teaching time.  Yes, there are now more self-defense classes available.  Self-Defense 101 for Women is now a six week course (up from 5 weeks), and offered in more venues:

Several highly-publicized incidents of stranger attacks on women, and self-defense comes to the media mind.  Four women have been assaulted in Seattle’s north end, generally considered fairly residential and safe. KIRO TV News came out to talk with me, and here’s their evening story for Tuesday February 12:

If the above video doesn’t play on your browser, visit the KIRO site for viewing.

Later that evening they came to take some video of a class I was teaching. While we were not the “feature,” they did show some really good work by our students.  I’ll post that one when I find the video online.

Visit my website for more info on taking a self-defense class.