Good morning!  Today is Wednesday October 6, 2021.  The touch of the autumn air is chilly and wet, a relief after this summer’s record heat. Leaves, turning brilliant reds, yellows and orange, are just beginning to drift to earth. Halloween, just one evening of ghosts and ghouls, spirits and spectres, will be here in the wink of an eye.

October is Domestic Violence Awareness Month. Unlike Halloween, though, domestic violence is not limited to October, nor should we be aware only these 31 days.

Domestic violence is a wraith that stalks its prey all year long. Abuse victims can be haunted even after the relationship ends: they are more likely to suffer depression and anxiety than are others, less able to form long-term loving relationships, and more likely to engage in harmful, high-risk behaviors, according to the DHHS Office of Women’s Health and the Centers for Disease Control and Prevention.   Life during this pandemic has exacerbated incidents of intimate partner violence. 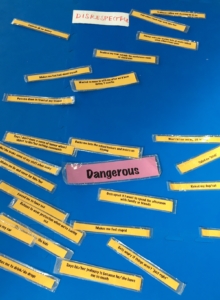 individual incidents and abuses were commonplace, even routine, and were socially OK and supported by legal conventions, which is what is meant by systematic. Women put up with them for various reasons. We heard that’s just the way it was, or that’s just life as a woman in modern America so deal with it. Or “boys will be boys.” Or there would be consequences, such as sexual assault, physical battery, or even murder (even today half of female homicide victims in America are killed by a current or former intimate partner). Those possibilities would hang in the air, unseen and unnamed, a vile apparition always making its presence felt even if invisible.

We touch on this issue in our self-defense classes, especially the six-week course, as women’s single largest risk of physical assault is from domestic violence.

If you know a someone in an abusive or unhealthy relationship, download this info flyer and send it to them, if it’s safe to do so (remember, abusers often try to monitor and control all communications). If you are into planning and lists, take a look at this inventory for safety planning. Send it to their friends also — they probably feel like they’re watching a bad horror movie, powerless to intervene. In fact, send it to anyone you know. It may save them from this nightmare later. Do your part to exorcise this demon now, for the whole year.

The Fine Art of Just Saying No
Supporting Survivors
Gaslighting At Work?
Making Better Choices
Being “Nice” vs Setting Boundaries?
Look A Book: The Psychopath Inside
“Special Sauce” Intervention That Worked
Boundaries with Mother
Contact