Last month, February, was, among other designations, Dating Violence Awareness Month.  I’ve heard a statistic that 80% of parents could not correctly identify potential warning signs that their teen was in an abusive relationship.  It’s almost understandable, for many teens that time of life is marked by emotional volatility.  Parents could — if they were not aware that for teens dating violence is quite common — easily believe that their child was just going through a phase.  Or maybe they want to believe that dating violence happens to others, the less fortunate ones.  Or maybe the parents know and like the abuser, and are not believing that person could be an abuser.

Oftimes teens themselves are reluctant to tell parents.  They might fear they will not be believed, or they will be blamed for the abuse, or some of their newly-gained independence will be rescinded.  All possible.  Yet, overall, we do need for teens to have safe, supportive people in their lives.

For several years I was a guest lecturer for one of Seattle Central College’s Women’s Studies classes.  Each October (Domestic Violence Awareness Month) I gave a self-defense presentation which included recognizing behaviors constituting abuse.  Not just specific behaviors, but recognizing patterns of controlling and coercive behaviors.  How these actions served to isolate the target from supportive family and trusted friends, limited the target’s choices in many areas, and erase the target’s sense of their own identity as a person.

I would hang up a clothesline (yes, one that could be used to hang up the wash) across the room.  On that clothesline I put 4 tags:  Annoying, Disrespectful, Dangerous, and Life-Threatening.  Annoying meant that someone was poking one of your boundaries, it seemed pretty small even if noticeable, and you weren’t sure if you should speak up.  Disrespectful would be a boundary poke on the Annoying level, but now you’re sure it was on purpose.  Dangerous is a boundary violation that included a risk of harm.  And Life-Threatening didn’t have to mean you would die, it meant your quality of life would significantly change for the worse, maybe for the rest of your life.  These 4 tags are markers along a continuum of snippets of behavior.

I’d have a bunch of other tags, each with specific acts, the snippets of behavior

.  Here are a few, think about where you’d place them along the continuum:

This is just a smattering of snippets.  There are many, many more.  The most important lesson gleaned from this exercise is that abuse may begin with “annoying” behavior, but repetition and escalation to disrespectful, dangerous, or beyond marks the pattern as abusive.  Recognizing the beginning stages is key to dating violence awareness.

After class, I always had a couple of student approach me.  Their stories were fundamentally the same.  The had this significant other who engaged in so many of these behaviors, and told them outright that this was “normal” for a relationship, that they would never get better, that their expectations were ridiculous, that they were crazy.  (BTW, these statements can also go on our continuum.)   They were relieved to find out no, they were not “crazy” or had unreasonable expectations, that their experiences had a name and were defined as controlling and abusive.

I wondered why they did not learn that before entering college.

Many in my adult classes express chagrin that they too did not learn to recognize these behaviors earlier in life.  Dating violence awareness, for quite a few people, gets learned later than they expected.

Maybe some parents don’t recognize the signs of abuse because they didn’t learn it, or have learned to accept that behavior as normal.

It’s never too late to learn that you don’t have to cater to manipulative and abusive people.  And maybe we should learn these fact earlier.

It is now October.   Eerie in October.  The touch of the autumn air in the morning is damp and foggy; even after the fog burns off and the sun emerges, there’s still that after-chill. Leaves, turning brilliant reds, yellows and orange, are just beginning to drift to earth.  The coral maple in my front yard is pretty nice! 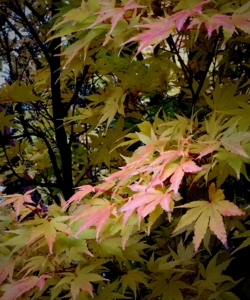 Halloween, just one evening of ghosts and ghouls, spirits and spectres, will be here in the wink of an eye.  Just three days from now.

October is also Domestic Violence Awareness Month. Unlike Halloween, though, domestic violence is not limited to that one evening in October, nor should we be aware only these 31 days. Domestic violence is a wraith that stalks its prey all year long. Abuse victims can be haunted even after the relationship ends: they are more likely to suffer depression and anxiety than are others, often less able to form long-term loving and healthy relationships, and more likely to engage in harmful, high-risk behaviors, according to the DHHS Office of Women’s Health  [Sidenote:  I used to cite a page from the Center for Disease Control website for domestic violence, but it seems that page on the effects of DV has vanished and I could not find a comparable one on the CDC site.  Frankly, CDC, you lost some credibility with me this year — you know those COVID “recommendations” that were tainted by political ambition.  So how about you get back to recommendations based on science?  Then we can talk about re-building trust.  In the meantime, maybe we need to take a break from each other.]

In the 1970s the phrase “the personal is political” gained traction among feminists as women recognized that individual incidents and abuses were commonplace, even routine. And they were socially OK, and systemic.   What does that mean?

Let’s say you do not abuse your significant other, but your buddy does and you know about it but you ignore it, don’t bring it up, don’t ask about it, don’t offer help, don’t express concern, but hang out with your buddy like always, and so do everyone else, that makes is socially OK.  Socially OK means there’s no consequences for that behavior, and in the case of DV that should not be OK.  Systemic means that the issue isn’t taken seriously as a social problem, but rather as a rare individual issue or a personal failing, so few social resources are devoted.  That means there’s a lack of available assistance for someone who is being abused.  Furthermore, if said abused person decides to speak up, there’s a good chance they will end up socially isolated, financially damaged, and relegated to society’s fringes.  Also not OK!

Women have put up with abuse for various reasons. We heard that’s just the way it was, or that’s just life as a woman in modern America so deal with it. Or “boys will be boys.”  Or there would be consequences, such as sexual assault, physical battery, or homicide. Those possibilities would hang out like an elephant in the room, ignored and unnamed, a vile presence always felt even if invisible.

If you know a someone in an abusive relationship, please download this flyer and send it to them. If you are into planning and lists, take a look at this inventory for safety planning. Send it to their friends also — they probably feel like they’re watching a bad horror movie, powerless to intervene. In fact, send it to anyone you know. It may save them from this nightmare later. Do your part to exorcise this demon now, for the whole year.