That pioneering piece of legislation giving college girls equal rights to resources for sports on college campuses is turning 40 on June 23rd. It’s older than many of its beneficiaries, and because of Title IX there are MANY beneficiaries.

Sports is much more than play — it teaches lessons of persistence, teamwork, fairness, and cooperation. Even though we too often hear about teams, coaches, and players who seek unearned wins by “gaming” the rules, there are sanctions and penalties and commissions to keep cheaters in line. And sports is one of our main venues to discovering out strongest selves.

In addition to self-defense, I teach traditional karate. I train and teach at Seattle’s Feminist Karate Union, and also run programs for children at Thurgood Marshall Elementary and Lowell@LIncoln Elementary. In these schools, parents most often enroll their child in this enrichment program to develop strength, balance, and coordination; increase self-discipline and goal-setting; and learn to focus. Parents in these schools rarely cite self-defense as a motivator.

Yet, in an indirect way, being involved in sports may be crucial to women’s self-defense:

This last point is the most important. Self-defense is largely a mental game. I’ve noticed this among my adult self-defense students. When inactive little girls grow up never having experienced a physical challenge, they are more often fearful of the harm a larger male attacker can inflict. When physically active (or formerly active) adults sign up for a self-defense class, they are more confident that there is a tool or technique they can use to extract themselves from harm. And that is the best predictor of successful self-defense.

Earlier this year Strategic Living posted a Seeking Super Sheros contest. This contest sought submissions for female self-defense sheros with their own super powers. And we have a winner. 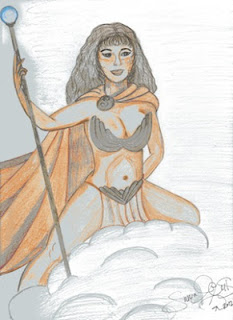 She-Rah!’s powers are mind control and X-ray vision. She spends her life perched on the clouds, looking through the world with her X- Vision. She scans her territory night and day making sure that potential muggers and rapists and murderers are kept at bay. If these evil-doers get the idea to do wrong, she changes their minds – and not in a good way. Their brains turn to mush and they are rendered as helpless as infants.

Congratulations to Shara, and thank you to all other contestants!

If you want to learn how you can develop your safety powers, check out this summer’s self-defense class listing.

Many inhabitants of the Emerald City (that’s Seattle) are dismayed by the recent spate of shootings. We can point out that the our fair city’s rate of gun violence is in fact low in comparison to other comparably-sized American cities. Reassuring to some, perhaps not so much for those who lost friends and family.

And out trots that perennial argument. Do guns kill, or do people? If Seattle had tighter regulations on gun sales and ownership, could some of these murders have been avoided? Or should more people be allowed to carry guns in more places, to stop the evil-doers in their tracks?

I am no expert on firearm legislation. I do, however, worry about the eagerness of some to bear arms. A couple of years ago, when the media spotlight was on the University District and the emailed Alerts about all reported crimes around campus, some UW students reportedly began carrying guns and organized armed patrols of the community. If their members are much like the spokesperson interviewed on KUOW, I would be more afraid of them than of most muggers. To my ears, this guy came across as just spoiling for an excuse to blaze away.

I do know some people who own guns. They have a healthy respect for firepower, practice regularly, and are very concerned with gun safety. They are not the gun owners I fear.

My concern is that some are so keen to jump to the most lethal form of self-defense, rather than looking first at other prevention measures. There are reports that states with a “Stand Your Ground” law are seeing a increase in killings. Rather than resulting in a decrease in crime, these laws may be justifying needless homicide.

As a self-defense teacher, I am occasionally asked about carrying firearms. (Most often, however, the weapon I’m asked about is pepper spray.) What I in turn ask those students is: are you willing to kill someone? Are you willing to go to the firing range and practice on a regular basis? Do you understand that there’s an emotional cost to taking life? Do you have the names of a good lawyer and a good therapist? If you are not willing to think long and hard about these questions, you should not be considering carrying a gun.