Tag Archive for: rates of assault

Today is Wednesday, May 5, the year is 2021. And I’m gonna geek out on safety stats today.

I began training in Karate in November 1992 — which is a long time ago, 28.5 years in fact — and that also began my education in self-defense. I began training at the Feminist Karate Union, which was founded in 1971 — an even longer time ago, 50 years — by an intrepid and driven feminist named Py Bateman. It began not as a Karate school, but as a self-defense class at the University of Washington. At that time, rates of assault were really quite high. Py Bateman not only teased out physical techniques from traditional Karate that just about anyone could learn quickly, but also worked with UW faculty on what we’d now call assault dynamics. You know, all that gooey and squishy psychological and social stuff that impacts how we react to threats. Sometimes it convinces us that we really can’t fight back, sometimes it kicks us into high gear to kick butt.  But I’m digressing . . .

So in the 1990s, and beyond, I read quite a few books about self-defense. One thing I noticed is how many of them somewhere towards the beginning stated “the rate of violent crime is increasing.” And there was nothing, no footnote or citation, given to back that up! Even today, a lot of blogs or social media or so-called e-news lists still make that blanket claim. A couple of decades ago I wondered if the rate of violence really was going up that much year after year after year. So I decided to do a little checking. And I found that the rate of violence in the US has been in decline. Since 1993.

In my longer classes I do discuss a couple of relevant statistics. My main source is the Bureau of Justice Statistics. Each year they survey a representative sampling of the American population, asking if specific violent crime happened to them.  (The one area they don’t speak to is homicide, as the deceased don’t respond to surveys.)  The main benefit of the BJS is that they also ask if victims reported the crime to police. So we also get some idea on rates of crime, whether reported or not, as well as better numbers on overall violence.

Now I didn’t want to be THAT self-defense teacher who got stuck in a time warp and never updated my figures and just relied on what most others repeated over and over.   Hence geeking out on safety stats.  Every couple of years I go back and look at the current numbers. Because they change over time, and I owe students the most accurate information available to me.  So, as I said, I’m gonna geek out a bit on the stats. 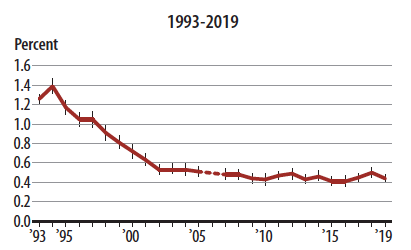 The overall rate of violence in the US of A has indeed been in decline since 1993. Most of that decline happened over the 1990s into the early 2000s. Since then it’s mostly been comparatively flat-ish, a mild downward slope with some variation year by year. However, there seems to have been a bump upward in homicides the last year or two, and there may be the beginnings of an uptick in overall violence. Is it another variation, or a trend? We won’t know for several years.

For just about all of the years since 1993, the answer to Q1 is MEN. However, the difference had been narrowing over time. And it may just be that in 2015, 2017 and 2018, women had been more often victims of assault than had men. By a very small margin, and I don’t know if that difference is considered statistically significant, but they are getting even.

Are men more likely to be assaulted by strangers or people they know? Earlier on the answer would have been strangers. But those two figures also have not only been declining but have been getting closer. And some years, such as 2015 and 2017, they are VERY close. Apparently a number of statisticians are currently saying it’s about even, that the difference is statistically insignificant.

In case you haven’t heard the phrase “statistically insignificant,” it means that because we are not counting each and every individual in the US there’s some room for error.  Statisticians calculate what they expect the error may be, and the difference between two numbers, if small, may reflect not a real difference but just that expected margin of error.

The BJS has a nifty web tool, the National Crime Victimization Survey Victimization Analysis Tool.  Using this, you can quickly sort through their database of statistics to look at specific figures.  I used it to sort through the data to find numbers of all assaults committed against men and against women by categories of assailants (intimate partner, other family, friend or acquaintance, stranger, unknown).  I then repeated the process three more times, narrowing down the assault types to sexual assault, then aggravated assault, and robbery.  You too can do this.

And of course I’m providing a link or two for your own review. I’m not expecting you to just take my word for it. I encourage students to develop a basic understanding of how scientists interpret numbers taken from real lives and apply them back. Please do take a look, at least at some summary pages.