There are now SIX sections:

Congratulations on completing Self-Defense 101! You learned a lot in this course. The lessons you’ve absorbed will help you navigate through life’s waters when they get rough. Feel free to go through the videos and lesson recaps whenever you want. These will invariably change in the future as this class continually evolves, and you will still have access to whatever the current versions will be.

The LifeLines exercise helps when you know someone in an abusive relationship and you want to help. But what you could say to a friend who’s confiding in you? The red text is often said by well-meaning yet frustrated people, while the blue text is more supportive. Remember, an abuser is trying to chip away at the target’s trust in her judgement and ability to act. When we give people the red lines, we too are telling them what’s best for them. When we respond with the blue lines, we are supporting them in self-determination.

Confrontation Statements is a list of what you can say to a person who is pushing your boundaries. You’ve probably already been nice to them, and now it’s time to get firm.

BONUS VIDEO! Unless specifically asked about in class, I generally don’t cover hairpulls. Yet it can happen. And, if it does, what you can do about it and why. If you cannot get it to play on this page, you can watch it on YouTube.

Two other topics we did not get to are multiple attackers and facing weapons. Each is covered in Self-Defense 102:  Beyond the Basics. In the meantime, here is the short version.

Multiple Attackers: You can only fight one person at a time. When faced with two or more, positioning is critical. Do do not want to find youself between two (or more) attackers if you can at all help it. So you need to move, and fast. Position yourself so that Attacker 1is between you and Attacker 2. Use your 3+ combo to disable Attacker 1 ASAP. Then there’s a good chance Attacker 2 will run. If not, then you’ll have to deal with him too. Sometimes you can actively use Attacker 1 (disabled) as a shield between you and Attacker 2.

Facing Weapons: This is scary, and mostly because the person holding the weapon is not an “expert,” and in fact is likely to be very unskilled in using weapons. The major reason a weapon is shown is for intimidation. (If the intent is murder, you will likely be killed very quickly, and may never even see the person or weapon.)

The critical point here is to breathe and try very hard to not make sudden moves. The weapon holder is quite possibly nervous, and you don’t want him to accidentally use it. Ask what he wants, tell him I’ll give you what you want but please don’t hurt me. Go along with him — pretend compliance until his attention waivers and you have a chance to escape. This is a good time to use de-escalation verbal skills. (De-escalation is also covered in Self-Defense 102: Beyond the Basics.)

The main types of weapons are the 3 Bs: bullets, blades, and blunts.

Despite the more scary parts of facing weapons, most of the time a shown weapons is NOT USED.

For a more positive note, take a look at this story about my colleague Helen Yee and her recent run-in with a gun. And how she won.

We did not discuss human trafficking, yet it is a real issue. Human trafficking is the contemporary label for slavery. It is not just an issue in third-world nations, it is an issue in our backyards, particularly around the I-5 corridor. Take a look at this article from the Seattle Times about how one young woman almost fell prey to sex traffickers.

Way back in the first week we noted that often people believe the rate of violence is higher than it really is — in fact has been decreasing — because of constant media reports. There’s been some research on the effects of media, particularly television, on viewers’ attitudes towards real-world violence. Artist John Boak calls this the “Mean World” effect, and has created some posters for you to plaster on your TV screen. Here are my two favorites. 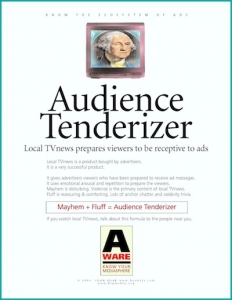 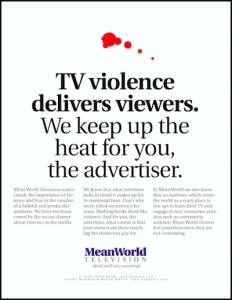 Sometimes domestic violence can be masked in humor or minimized. This article by Paul Kivel (click to download the PDF) is one of my favorites linking DV to other forms of oppression and social justice. By reading this you will gain a better understanding of why abusers can get away with so much, with so few consequences.

On a “lighter” note, this cartoon illustrates how an abuser might minimize what he does (click image for PDF). 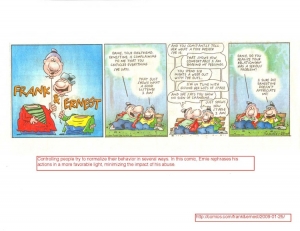 Another mostly untouched topic is psychopaths/sociopaths. Like Ted Bundy and Gary Ridgeway (Green River Killer). These videos are by neuroscientist Dr. James Fallon (not to be confused with late-night talk show host Jimmy Fallon). He’s researched brain scans and psychopathic killers, and then found some interesting skeletons in his own family closet.

There are more videos of Dr. Fallon on YouTube and TED Talks, I just like this one best.

Practice and Teach. Even though the class is officially over, you can still practice. Teaching deepens your understanding of the skills, so keep that up also.

Observe. Continue to hone your intuition. That is your best tool for detecting when someone means you harm. This is a lifetime project.

The rate of violence and assault in the United States over the last five decades has gone down. Most of this decline is in assaults on men; assault rates on women, while also decreasing, has been going down more slowly.