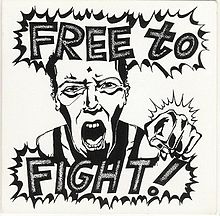 The Riot Grrrl movement in rock music began in the early 1990s in the glorious Pacific Northwest (as well as in the other Washington), as a response to subtle, blatant, and violent sexism, racism, and homophobia in the rock and punk music scenes. The women who started this movement (like those who joined the leftist pollitical movements of the 1960s and 1970s and began what we now consider modern women’s self-defense) did not see their experiences and interests in the work produced by their male peers. In deciding to make their own, the Riot Grrrl movement embodied “Do It Yourself” (or DIY) values.

Common topics for Riot Grrrl music and zines included sexual assault; domestic abuse; sexism, racism, and homophobia; female empowerment; sexuality and partiarchy; and women’s place in the music scene. (There may have been one or two silly love songs, but I haven’t come across them yet.) From there, it was only a short step to taking up self-defense. In her her Self-Defense section of Rock ‘N’ Roll Camp for Girls, Jodi Darby wrote about her experiences in the late 1980s and early 1990s:

“Being a girl at punk shows taught me to take up the space that was mine to take up, to not step aside and give away my power. It taught me hard and fast lessons on boundaries, non-verbal communication, and the benefits of walking away from an unsafe situation. . . .

“As I grew older, self-defense became part of my response to the violence against women and girls that is entrenched in our society. . . . I realized I was being forced to make decisions based on the threat of violence. These decisions affected my freedom of movement, and this lack of freedom was causing me to become nervous, mistrustful, paranoid, and, finally, angry. My safety, or lack thereof, impacted my life every day.” (p. 159)

Free to Fight is a compilation album released in 1995 by Jody Bleyle on her label, Candy Ass Records. The intent was to spread the word about self-defense increasing women’s confidence and empowerment. Just making safety and choices a topic that needed discussion was (and still is) a big deal. Self-defense is anything you do any day to keep yourself safe, so you can go out and fully engage in community life. These recorded tracks and the accompanying booklet will give you examples and ideas you can use.

These recordings are split between self-defense stories, self-defense instruction, and music. Use the play button between the number and song name to play each track.

IMPORTANT NOTE: Several years ago these tracks (as well as the accompanying booklet) were available online for free, under a Creative Commons license that allowed you to listen and copy to your electronic media devices, but not to sell them. I am assuming the license is still in effect, even if that website is no longer online.

This uber-pamphlet contains a wealth of essays, artwork, poetry, and instruction.You will discover new gems with every re-reading. Best of all, FreeToFight.pdf is, for now, free.

Filmmaker Lucy Thane documented this time period in her 1997 work She’s Real (Worse Than Queer). It is available on Vimeo, and the links are included here for your convenience. The film is broken into two segments, and the second has a brief segment where participants talk about the making of Free to Fight (begins at about 14:40).

There is some “bad” language and nudity.

She’s Real (Worse than Queer) Part One 1997 from Lucy Thane on Vimeo.

While the “official” Riot Grrrls movement eventually imploded, we are still feeling its positive aftershocks. One important contemporary effect is the nation-wide network of non-profit Girls Rock Camps, dedicated to building positive self-esteem in girls and encouraging creative expression through music. These programs provide girls with an opportunity to participate in an environment that fosters leadership and teamwork, encourages social change, and cultivates a supportive community of female peers and mentors.*

I’ve worked with Seattle’s Rain City Rock Camp for Girls the past several years, as you can see in the video below. As confidence is a prime ingredient to self-defense success, I heartily endorse the RCRC program and its mission. DIY lives on!

WHAT PEOPLE ARE SAYING:

“Joanne was knowledgeable, calm, respectful, and very impressive. I would definitely recommend this course. It was a great balance of physical practice and non-physical knowledge.”

“I liked the camaraderie between the women in class with each other and with the teacher. I liked Joanne’s realistic portrayals of situations and honesty in answering questions.”

“In addition to strong psychosocial skills, Joanne is an effective teacher providing us with a variety of techniques to use in a range of situations.”

“Our sessions were very well organized so that there was a balance of physical activity, listening, and discussion, with a good mix of intellectual and emotional content.”

“Joanne’s approach to teaching self-defense is positive, and focused on our choices and increasing abilities.”

For Teen Girls Only – Testimonial 7a

“I just wanted to thank you Joanne for the amazing self-defense course that you provide.  My 17 year old daughter took your class with 2 of her friends and it was the best thing she’s ever done!   I’ve seen such a transformation in her confidence, the way that she expresses herself and stands up for herself in all different relationships.  She has set clear boundaries with her friends, with her boyfriend and just today with a boy who was acting completely inappropriately and getting away with it.  But she shut him down and is now following up with her teacher.  She’s also used her new language in her job/volunteer work.  Your course was life changing for her.  As her mom, I thank you sincerely!

Power is the ability to do good things for others.