I used to work a regular 9 to 5 job, before shifting my focus on teaching self-defense. A feature of many regular jobs is having co-workers. Some you like, some you get along with, and others, not so much. At one job I had two co-workers who really did not like each other, we’ll call them Sally and Nicky. They pretty much did the same tasks for different supervisors, but often disagreed on processes. And every so often, their disagreements would get a bit loud. Specifically, Sally would get loud.

Now, when Sally got loud it wasn’t just that her vocal volume went up. She began verging on, and often crossed over into, verbal abrasiveness, even abuse. That’s not really surprising. When we take on expressions of anger, such as raising our voices, the emotion — even if we don’t intend it — will often also rise. (We discuss that in our self-defense classes, as one reaso 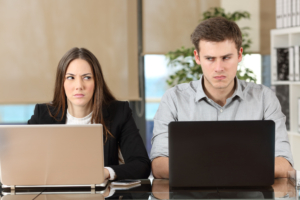 n why using your voice is so important.)  Sally would ALWAYS deny that she was angry, her voice just got naturally happened to get loud. But the reality was, it didn’t JUST get loud. She’d begin throwing in derogatory comments on the other person’s overall competence and intelligence.

One day Sally and Nicky began one of their discussion just outside my cubicle. As usual, it began in quiet tones, but within a couple of minutes Sally’s voice began to rise. I got up from my desk, walked over, looked each of them in the face, and said, “indoor voices, please.” Then went back to my desk. They kept it down for another minute, but then Sally’s voice again began rising. Again, I walked over and said in a firmer tone, “indoor voices please.” This time the remainder of the conversation was held in conversational tones.

Later that day Nicky thanked me for intervening. Because Sally’s voice never rose to the point of agitation, she didn’t get to that verbally abusive level.

I’m not saying this will work in any and all situations. I had insider knowledge, a “special sauce.”  I knew the participants well enough to recognize that Sally did value the appearance of appropriate workplace behavior. I also believe she thought I had influence with the bigger boss. Those two factors probably contributed a LOT to why my “special sauce” intervention worked.

One critical aspect of bystander intervention is that while intervention is important, in our ideal world we’d all interact with other people in non-harmful manners, we’d all have that level of self-awareness and care. In that ideal world, we would not have to intervene, but if we did we’d be more comfortable and confident doing so. Maybe we’d all know and care about our friends and colleagues, so we have our own “special sauces” that would appeal to their better selves. We don’t live in that ideal world, so how do we signal to others joining our social and work groups that our norms are more respectful and non-harmful? We explicitly state those boundaries and expectations, we hold each other (as well as ourselves) accountable for actions, and we have appropriate consequences for inappropriate behavior.

I personally never overheard a Sally and Nicky argument after that. Unfortunately, they did continue, out of my earshot, because it seemed I was the only one to speak up. Was I the only person who had the recipe for the “special sauce?” No, but apparently I was the only one not too uncomfortable speaking up.  So even if you feel let off the hook because someone else already said something, no you are actually not off the hook. Please consider how to do your part to create a safer environment, so you can lessen the odds that you’ll ever have to use your more drastic self-defense skills.

If you answered new trend in home decor, you’re about a century out of date.

Gaslighting is a form of emotional manipulation. It is a way of telling people, especially women, that their opinions and perceptions are out of whack with “reality.” Out of whack with the reality that the manipulator wants to believe, that is.

Whenever anyone tells you that you are “over-reacting,” “too sensitive,” “too emotional,” or “I was just joking, don’t you have a sense of humor” (and there are infinitely more variations), they are minimizing and discounting your feelings and perceptions. This is substantially different from someone saying to you, “Wow, I have a totally different understanding of this!” Both may be ways of expressing disagreement, but the former is an aggressive way of denying that your perspective is valid.

Sometimes the person doing the gaslighting is feeling defensive because they don’t care to be “wrong.” Other times, if the person does it on a regular basis, it is plain abuse. Once seen for what it is, it’s simple. Until then, it’s crazy-making.

In today’s self-defense class, we talked about how body language can be used to try and intimidate and invalidate others in a work environment. How to clearly recognize it, and how to use your own body language to minimize its effect on you. How to tell someone, “hey, you’re discounting my opinion, quit it!” And your options, in case they don’t.