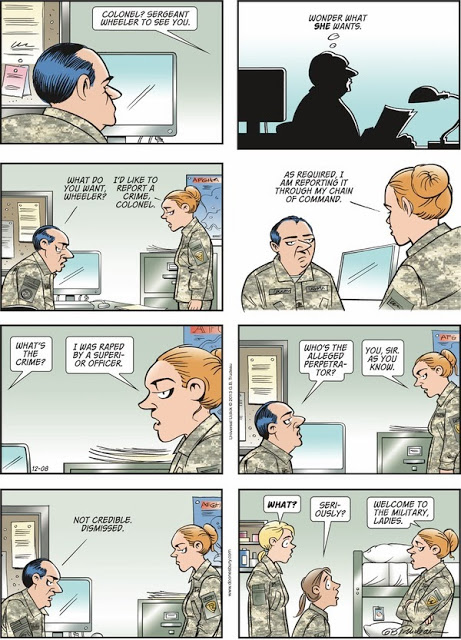 A few days  ago I posted about a FOX News “pundit,” Liz Trotta, who expressed incredulity that women would enter the service and not be expecting sexual assault. The whole episode reminded me more of an old Monty Python routine (“NOBODY expects the Spanish Inquisition!”) than real news commentary in how surreal Trotta’s opinions were.

Former Marine Sarah Anderson wrote a truly AWESOME piece about Ms. Trotta’s inane comments, and at the end asks us to sign an online petition demanding that FOX fire Trotter. I signed, and I highly recommend you do too.

I looked up “pundit” in Ambrose Bierce’s The Devil’s Dictionary, hoping for some pithy and witty quip to quote. Nothing. I think it’s the season for a new, updated dictionary.

I really hate it when women in public positions spout off anti-feminist platitudes. For example, how does Liz Trotta think she got where she is, if not on the backs of women who pushed to be able to engage and be taken seriously in public discourse (i.e., “feminists”)?  Maybe you never heard of Liz Trotta either? I hadn’t, until I saw this video. Lis Trotta is a FOX News “pundit,” and here she’s opining about women serving in the US military who’d been raped while in service.

(if you received this post as an email and cannot view the video, you can see it on my blog online or at Media Matters. If you are using an iPad or iPhone, you may have to go to a computer that plays Flash.)

So much deliberate ignorance, packed into less than 4 minutes.  I’ll just point out the parts I consider most egregious.

Adam Weinstein’s article in Mother Jones points out some fascinating facts of Trotta’s background that make her statements appear even more ludicrous.

You can help. One female military veteran has begun a petition on Change.org to ask the US House and Senate Armed Services Committee to change the way sexual assault is handled. Because rape should NOT be expected, or tolerated, when women sign up to serve. Please sign it today; remember that sharing is caring, so pass it along to your friends.